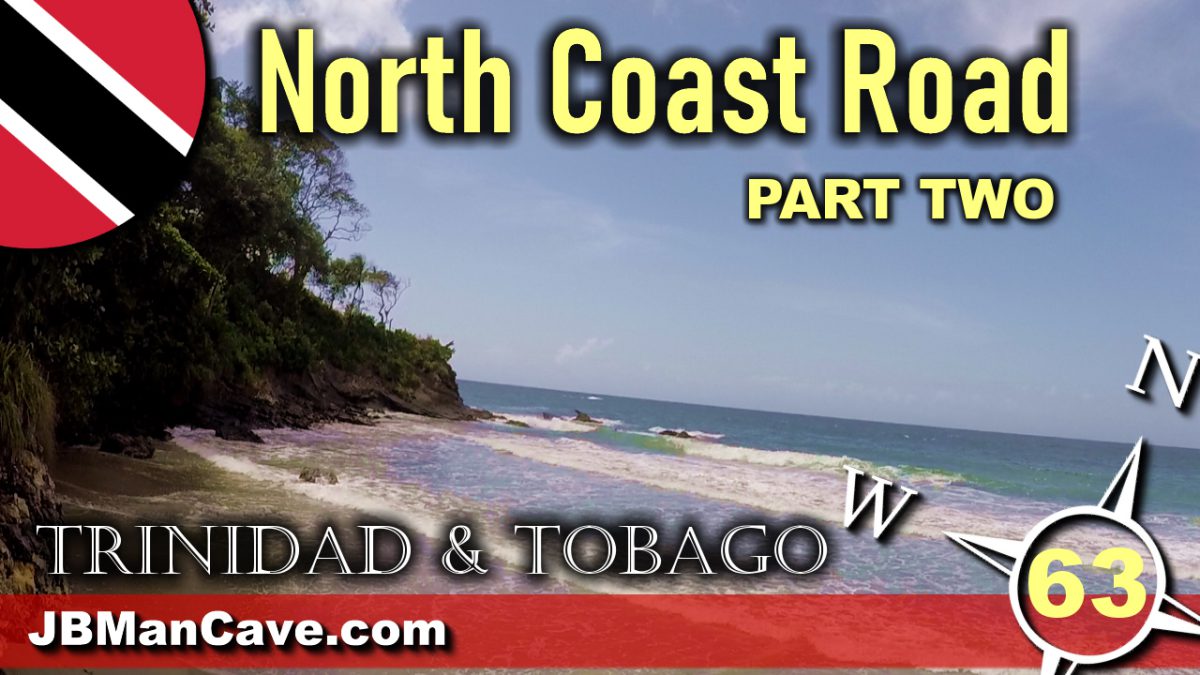 Hello friends so we are on the second part of the road trip on the North Coast Road of course if you want to see me come into here you would have to see the first part but in this second part basically I am going to reverse out turn around and head back this is a long road that follows the north coast of Trinidad and this was the end of it basically I mean there’s a little space up ahead but nothing really is just a lot of mud and I didn’t want to get stuck there so I figured I’ll just turn around but this is as far as you can go basically.

needs a good wash after this

and of course uh if you enjoy my videos and you would like to become a patron please do you can go to my site jbmancave.com

it looks pretty good doesn’t it

all right so now that

bit of time to severely beach I am going to

see the area is small but nevertheless it looks really good

and that little piece there is always called camera tricks

so for my judgment this be if you ever found it

these are the um ATVs that you can um rent

so that’s the truck coming

so you can get an idea of what it looks like

I do have a

but soon I will have that situation solved

so some of these places might have their own

um access to maybe a private beach or private b

and there you can see the coastline it’s really nice

but I also have some plans for that as well

by the way if anybody a resort owner or you have a you know a beautiful place that you’d like to highlight I wouldn’t mind highlighting it you just have to invite me and let me know you can get email from my YouTube channel or use my website address jb mancave.com or jboard.com and send me an email let me know where you are what you have

same with my walkthroughs

right listen all this shot

using a canoe is it

right here is an entrance you pay I think twenty dollars TT like three dollars u.s and I guess there’s something good there to see nice beachfront but I don’t I didn’t have access to that today usually it’s getting late for us and I mean this video in conjunction with um part one and the Maracas video was all done in one day so you know I’m pretty exhausted but don’t worry I will be coming back another day

so we continue on the road

but I don’t have taxis do that too

not sure why I stopped there

probably taking a picture of something

so let you know that junction isn’t there

they can do that

yeah take the time to clean

I’m glad this maxi stopped there because

some other areas and for the spin as well

and some random footage on some of other Caribbean islands

only last ones I did was on nature

so there’s really no excuse to plant stuff

see like those burgundy we’re passing on the right croutons

and play it in the background

so I’m able to use it by license

this strip of road also seems to be almost single lane

I think at some point I will need to make a

you can tell by you know some other comments or whatever

you can see that these people are

I’m in no hurry

we were saying hey hurry to go nowhere

you can see maracas up ahead

but we’re a good distance from better

but we will be passing on tarik office at some point

there are also other parts to go down and

could basically ask access anything there’s not that way anymore

do you get all this congregation of people

providing places where people can be entertained

and it’s cutting out all the color from the video

like the risk in order to avoid pain parking

towards [..]
by the way as as my channel grows I will be diversifying I mean I already cover besides Trinidad and Tobago I already I also cover the islands and stuff but I also want to go into more of the social issues and I hope that the community goes that you will join me and talk

this is another small [..] as well but it’s not the one I’m talking about

I don’t have the chance

poodle looks like it’s having fun in our truck though

most of it already seems up to me down down

as you can see there’s no street lighting

for those of you who are enter four by fours I don’t use my 4×4 to get up here just gear 2 and 3 mostly sometimes 4.

there’s also um a lot of other stuff to do the kayaking canoeing whatever it is the small ATVs going through the mud that’s an option but of course most people just come up here for the beach, Maracas beach in particular or Tyrico or Las Cuevas

that one has some serious inclines

that’s the only thing about Trinidad lots of places to explore but you really have to know about them beforehand because you know you could get lost really easily and maybe end up in a place that you shouldn’t be it’s good to have some sort of tour guide friend family member whatever have you shown you’re wrong but with these videos on [..] give you you get an idea you get an idea of where you are going what you’re going to see and what the road you need to take so if you’re actually making a drive you could even plug into JB’s Man Cave pull up the video and drive along so if anything looks unfamiliar you have it right here

I am a at home dad

I believe this is the last ascent

and the golf estate

the road trip coming in

it would look totally different to you going back out

so this is the end of the note crossroad when we pass these pillars here these columns left will take it to Santa Cruz and right to Saddle Rd. and Maraval. Thanks for watching!

NOTE: The above text was taken from audio and may not be accurate. Please see the original video on JB’s Man Cave Channel.

Other topics: Barbados in the Caribbean